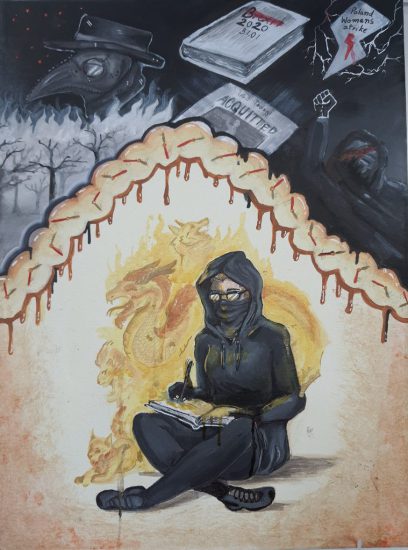 Did you enter the Creative Connections competition earlier this year?

The competition which launched in March this year gave children and young people a platform to express themselves through writing, drawing, mixed media and other creative mediums.

The winners have now been announced! Take a look at some of the great work that has been produced to be inspired.

The winners of the creative connections competition have been announced ahead of a book launch later this year.

The competition, which opened in March, sought to encourage local young people to share their perspectives on loneliness and isolation, and the importance of connection through creative writing, art or photography.

Attracting almost 150 entries, the competition saw a variety of submissions in the form of poetry, artwork, and even a dance performance.

Around 65 of the top entries have been selected to be included in a published anthology, with the winning artwork to feature as the front cover.

Councillor Ian Lindley, portfolio holder for children, education and skills at North East Lincolnshire Council, said: “We have been blown away by all of the entries – we have some phenomenal creative talent in our area, and we’re hoping to use as many of the entries as possible in some way or another.

“As well as working with Hammond House on the creation of a published anthology, we’re also looking at putting some of the song lyric entries to music, and publishing a really impressive dance routine.

“The aim of the competition was to encourage young people to share their experiences of loneliness and isolation, and the importance of connection through creative writing. These are things that have been brought to the fore over the past year.

“Connecting with people, sharing experiences and looking after your mental health are incredibly important, so I’m really pleased that the competition has highlighted this and given our talented young people an opportunity to share their perspectives.”

Pippa Curtin, Voice and influence co-ordinator at North East Lincolnshire Council, said: “We were really impressed with the entries, not just the quantity but especially the quality.

“Being creative is not only great for our mental health and emotional well-being but it clearly gives young people a voice in a way they feel comfortable with.

“We are excited to see the anthology ready for publishing and are planning a launch this summer to celebrate the great work and share this to help others feel more connected and reduce loneliness and isolation.”

The competition is part of work being done with the Young Advisors network, using Lottery funding for #TheTogetherProject.